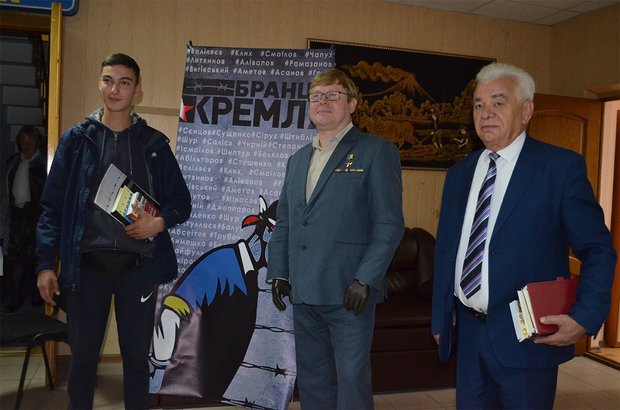 On September 25, students of IAPM Presidential University gathered in the Ukraine Concert Hall. They came to a lecture-meeting held within the framework of Kremlin Defenders project to talk to the organizer and active participant of the resistance movement against the Russian occupation in Luhansk region, Volunteer Defender, Hero of Ukraine Volodymyr Zhemchugov.

rector of the Academy Mykola Kurko made his introductory speech. He told the audience about the purpose of the meeting and turned the floor over to the project coordinator Olena Zhemchugova. She told about the history of the project, which, from the presentation of the film, has become a format for meeting students with the Hero of Ukraine. Watching the movie "Kremlin Defenders" was complemented by Olena's speech. She said that even after the hostages were released on September 7, 2019, another 80 political prisoners which are Ukrainian citizens remain the Kremlin defenders.

Then Volodymyr Zhemchugov addressed the youth. His speech was about the history of his family, the beginning of the war in the Donbass and the occupation of Crimea, the history of the emergence of the resistance movement and the modern guerrilla movement, and the danger of Russian propaganda, and how and when the war could end.

After the performance of the Hero of Ukraine, students communicated with Volodymyr in an "open mic" format having taken the opportunity to hear about the Russian-Ukrainian conflict from the mouth of a direct participant. At the end of the meeting, Volodymyr Zhemchugov presented to the Academy's library and the participants a book about the Kremlin's most famous prisoners, the history of Ukraine and the individuals who created it.