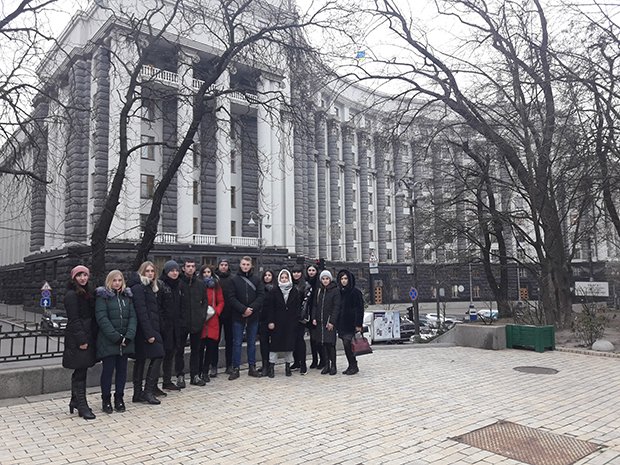 November 25, law students of the Khmelnytsky Institute and College visited the Government House and the Verkhovna Rada of Ukraine. They got acquainted with the peculiarities of the work of the supreme executive body.

The students visited the Museum of History of Governments of Ukraine, exhibits of which tell about the work of governments operating in the territory of modern Ukraine from 1917 to the present day. At the museum, students interviewed Ukrainian radio and watched a documentary about the formation of Ukrainian governments. They also made a tour of the Government House. Extremely informative and informative excursion was conducted by Vladimir Tatarenko.

In the hall dedicated to the Ukrainian Independence Day, students were introduced to the text of the Declaration of Independence of Ukraine dated August 24, 1991.

The most exciting part of the excursion was for students to visit the hall of the Cabinet of Ministers of Ukraine. They did not waste the opportunity to try out ministerial jobs and for a moment imagine themselves to be one of them. The great interest was caused by the exposition of gifts received by the heads and members of the governments of Ukraine, as there were various exclusive things to see there.

At the Verkhovna Rada of Ukraine students were shown behind the scenes, a briefing area and a meeting room. The excursion was stunning and informative due to the professionalism of the tour guide that accompanied the students. It was especially interesting to see with our own eyes what we can only watch on television.

During the excursion, students were able to receive not only a wealth of useful information, read important documents, learn about the history of the Ukrainian Parliament, but also to appreciate the incredible interior, unique and important for the state values, such as the Constitution of Ukraine, the Ukrainian flag, the picture».