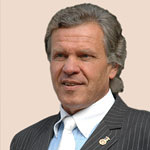 Shchokin Georgy Vasyliovych (born in 1954) – founder and Chairman of the Supervisory Board of the Interregional Academy of Personnel Management (MAUP), a well-known Ukrainian scientist and organizer of innovative education.

The developer of the original theories of social development, social management and personnel policy, as well as of the innovative scientific and practical direction – visual psychodiagnosis. Author of more than 500 published works, published in 12 languages. Created and described a comprehensive human resource management system.

He has been awarded Orders of the Ukrainian, Moldovan, Russian and Serbian Orthodox Church, Armenian Apostolic Church, as well as many awards of departmental, scientific and public organizations of Ukraine, England, Russia, USA. Winner of various awards in science, culture and education.